With a quality line up for the Primavera Road Race in Hatherleigh (Devon), battling for the win was always going to be tough and yet again, after his win at the Jock Wadley in 2018, Mikey Mottram Vitus Pro Cycling p/b Brother UK delivered the goods for his new team, and on his new bike, with a sprint victory over the classy Lincoln GP winner, Alex Richardson of Canyon DHB.

“It was good to get my first win in the Vitus colours” Mikey explained afterwards. “You always come out of the winter not quite knowing where you are at and whilst the numbers can look good one day to the next, you can feel different each day over the winter as you generally focus on your training and so can be carrying a fair bit of fatigue. It was good to be racing against Alex and the other Canyon boys as you know they will always be strong and have some one to work against”.

Asked for a summary of the race, Mikey explained “The race had a typical fairly fast start with early attacks and about 10 kilometres in, a strong group of five of us got away on and over the top of the main drag on the circuit we were building a small gap. Unfortunately, there was a large crash which forced the race to be stopped and restarted with a slightly shorter distance. The gap was not reinstated.”

“The restart was very fast and it was strung out for 5-6km and I followed a counter move by Alex drawing a group of five of us out. We were driving this break quite hard and soon opened a large gap and whittled the break down until it was just Alex and myself left for the final 15-20km. We both just played to our strengths and worked well together. The speed was always high so there wasn’t much opportunity to attack each other. I had good confidence in my finish so we took it to the line in a two up sprint I managed to win”.

The course for the race organised by long time organiser of events, Ken Robertson, was typical of mid Devon roads; constantly rolling with a bit of everything. It was a transfer out to the circuit with four (reduced to 3 laps after the crash) of the course with rolling main roads. The main drag and false flat top in the middle of the circuit helped sort out the inform from the out of form whilst the fast lanes helped those in the wheels. At the end of the circuit, it was a fast transfer back before finishing on a steady climb about 1km long.

Up against such a strong rider as Alex Richardson, the win was not going to come easy for Mikey who the year before, had beaten another classy rider in Joey Walker to win the Jock Wadley in a two up sprint. Mikey talks us through the sprint at Primavera RR saying “Me and Alex haven’t got the biggest kicks in the bunch as we are both much more VO2 Max kind of racers. I was keen to take it from the front and managed to take it to about 150m to go before having to open it up. I just got my head down and managed to hold him off. Alex gave it a good crack however and put in a solid effort to push me all the way”.

The 3/4 race saw ex Mid Devon CC rider Harry Loader with a minute gap when the race restarted. This all came back together on the run in and the win was taken by Hamish Fletcher Cooney from Bradnich who rides for a Northern based Off-road team All Terain Cycles. Cooney has impressed in the SW CX league this season so it was no surprise to see him take the win.

Thanks to all the friends and members of Mid Devon CC for helping. Thanks also to the SW NEG, SWRWG and the Accredited Marshals without whom we couldn’t race on the roads. 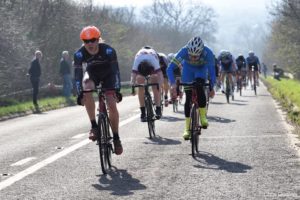 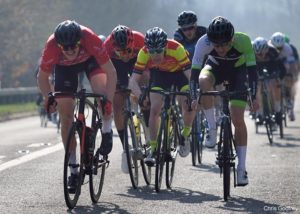