Primavera – Race Report and Round Up

Mid Devon’s promoting impresario Ken Robertson pulled off an impressive feat of running 3 races at the same time. An army of volunteers and helpers were summoned and bar a few minor hiccups the day passed smoothly. Compared to 2015 the weather was glorious, cold but dry and bright conditions at 9am promised a good days racing ahead. Thanks should go to Ken and all of the helpers without whom none of this would have happened 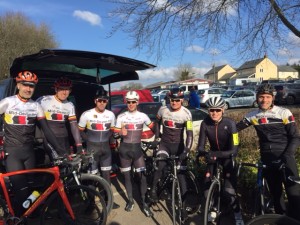 A chilly, but dry day for the first Road Race of the season for us. A few logistical issues meant the event was switched to a straight race, not a Pursuit format. The opening miles were steady, people getting warm! The first few skirmishes didn’t amount to much, except thin the race down a little. At one-third distance and up a decent incline, Emma Cockcroft attacked hard and split the race apart. Going over the top of the climb, then into the characteristic rolling countryside, a group of 4 established at the front. Emma, Nikki Carr, Jenny Powell and Lauren Dolan. The second group, was set firm at 20-30 seconds for the next 12 miles as both groups got stuck into the job. Once the race got into the quick final 5 mile run-in, suddenly the gap went to a minute and the race was set. Up front, Emma kicked hard at 1 mile to go, getting a gap before the final drag to the line. Lauren chased, not quite getting on terms, leaving Em to take the win, a good reward for taking the initiative earlier in the race. 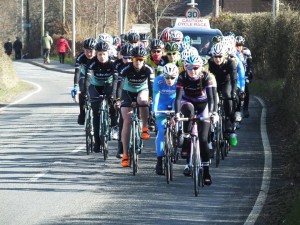 Mid Devon CC members Jenny Corser and Helen Anthony rode valiantly and came in with the second group. Also great to see ex MDCC startlet Lauren Dolan’s ever increasing stature as she makes the transition from Youth with ease

With a near faultless ride, Ian Cullen was the worthy winner of the Primavera support race taking the bunch sprint by a tyre width.  Delivering on the good form he has been showing in training in recent weeks, Ian was always in the right place, rarely leaving the first 15 throughout the entire race. 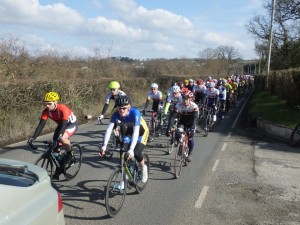 16 MDCC members made the 80-strong start line.  Conditions were sunny and dry but extremely cold with a brisk easterly wind keeping he race compact.  The route saw the riders climb out of Hatherleigh via High Hampton onto the Halwill Junction circuit.  After the usual flurry of early attacks the race settled into a steady pace sufficient to discourage serious attacks on the tailwind section out to Brandis Corner, after that the wind was enough to keep the race together, although Andy Perkins had a couple of digs to see if he could drag a group clear, but to no avail.

After the second lap of the Halwill Junction circuit, the race hit the long climb back towards Thorndon and here the MDCC riders, who had recce’d the course a week earlier, came to the fore with Ashley Towey, Ian and Andy taking up the pace and driving the bunch over the climb in an attempt to force a group clear. A group of 10 edged away gaining a small lead, but no-one was prepared to commit into the headwind over the top.  The attack did damage further back however, causing the bunch to disintegrate and reducing the leading peloton to 40 or so riders.

5 miles later came the tricky descent and then steep climb of Thorndon.  Andy took his chance attacking the descent to gain a lead into the climb, he was hauled back before the top, but with another 10 riders jettisoned from the bunch.

From then on it was a brisk run in to the finish, with the chequered flag placed at the top of a straight half mile long drag.  It was a bumpy lead into the line for Nick Weddall and Andy, but Ian timed his effort to perfection passing the 2nd place rider with just meters remaining.  Andy was also at the fore taking 6th place, with Nick and Ashley in the bunch too.

Mike Gratton, Harry Loader and Tim Prowse were tailed off the first bunch in the closing miles, but rode strongly to hold position, finishing just behind the front group.

The win comes 22 years after Ian’s last road win and just a month after he turned 40 – remarkably, that last win was in the Springtime Pursuit – the predecessor event to the Primavera!

Liam Bromiley (University of Bath CC) won the Primavera road race in Devon. Bromiley, winner of the Frome & Dist WH 10 the previous week, escaped into the wind on the final circuit, riding solo all the way along the ridge back to Hatherliegh. Jonathan Tiernan Locke (Saint Piran) won the bunch kick for second place ahead of Fraizer Carr (University Bath CC). 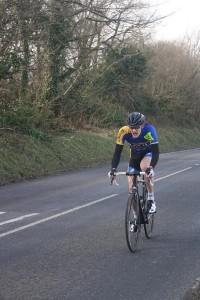 Liam Bromiley…..I wasn’t expecting too much going into the race, I know my form is currently quite good with a few decent results already this season, but would’ve been happy just to get in the points in what looked like a fairly strong startlist. I tried early on with some probing moves and a couple of short lived breakaways, deciding to then sit in the bunch for a lap or so before going again with a group of three others where we held the bunch off for probably 10k. When it was clear we were going to get caught by the bunch the others sat up, but with the final prime just up the road I kicked again and increased my lead. I wasn’t really thinking I’d be able to hold them off for the remaining 30k, just thought I’d have a go with nothing to lose. The final 10k was hard into a headwind, though being predominantly downhill helped me finish the job.
I’m hoping to maintain my current run of form, entering some more National B races and time trials, with the BUCS TT’s just round the corner in April I’m currently looking for a TT bike to help me achieve a decent result.
Primarily I aim to complete my Masters degree before a summer of committing to more training and racing, hopefully this season I can pick up some more strong results.”

Mid Devon CC members Jason Kettle and Matt Langworthy rode well to finish with the bunch. Another ex Mid Devon startlet Charlie Meredith was showing some good form with aggressive racing all day at the front 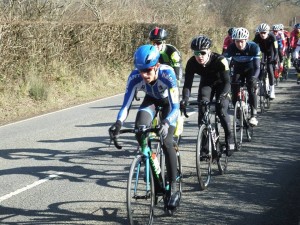