A race report by U14 rider, Jacob Thomas. 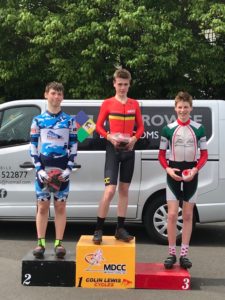 The Colin Lewis Cycles Grand Prix on Saturday was my first race in MDCC kit. It was dry and sunny with only a light wind. A good day for a race.

The Under 14s lined up with the Under 16s, so I was expecting it to go off fast. I had a good start and was around fourth wheel going into the first bend. The pace was high from the start. Not too hard, but enough to thin out the main group to around 15 riders.

Every lap or so somebody would try to get away from the group or just go to the front to lift the pace. However, they were always brought back by the bunch. Even the U16s weren’t allowed to get a gap. This is how the race went on for quite a while, speeding up and stretching out into a line as the attackers jumped off the front, then slowing down again as the race came back together.

My teammate Reuben was one of the riders who tried to go off the front. Riders from Taw Velo, Minehead and North Devon also had goes. Even I had a few tries but nothing would stick.

With about three laps to go, Morgan from MDCC and the other U16s finally managed to get a gap while Reuben rode tempo at the front to put off the chase.

After that everyone knew it was going to be a bunch sprint so nobody wanted to commit to another attack.

On the last lap I moved towards the back of the bunch so I could see what was going on. On the back straight a Minehead rider attacked, which stretched out the group so I started to moved to the front.

At the final hairpin I was in about fifth wheel and a Worx rider came sprinting past me on the left. I got on his wheel and used him to move forward. I started my sprint just before the last bend when I was in line with a North Devon rider who was already sprinting. I got the inside line around the corner and continued my sprint to the line. I managed to hold off the North Devon rider and win by a couple of bike lengths.

It was a tough race and everyone was really strong so I’m pleased with my result. When I finished it was also good to hear that Morgan had won the U16 race.

The race was a mixture of u16’s and u14’s and some familiar riders to watch (Sam Medlyn) and some others. It was great to start next to MDCC riders Reuben Heal and MDCC newest racer Jacob Thomas. We started off together and it quickly got up to speed. It was quite an active race with lots of little attacks just tiring out the bunch.

Sam and I attacked twice within the first half of the race and on one of them taking along with us another u16 rider Ben Woodland. I was feeling strong and keen to be in a long break away others were not as keen and I was not prepared or able to solo it to victory. When caught I sat in the bunch and sat comfortably in there.

Many riders attacked but were all brought back by riders in the front of the group, I sat in and allowed others to bring back these attacks.

Towards the end of the race with the last 5 laps I moved up the bunch planning on an attack, not wanting to be in a bunch sprint. Toward the front Sam and I agreed we should go on the last hairpin, which is followed by a bend into the finishing straight. On the 3rd to last lap we went, MDCC riders Rueben Heal controlled the front of the bunch along side Jacob Thomas giving me, Sam and Ben a chance to get away. It worked well and we gained a large gap. On the last lap I was in second position behind Sam, he kicked round the bend into the finishing straight, giving me a form of lead out. I kicked out the saddle in the last 40 meters. Side by side I lunged for the line we won me the sprint be an inch.

It was great teamwork from MDCC youth riders and strong riding from Reuben and it was great to hear of Jacob’s win especially as it was his first race in MDCC colours. As well as an impressive win from Louie Priddle in the mens race and a MDCC win in the womens race.