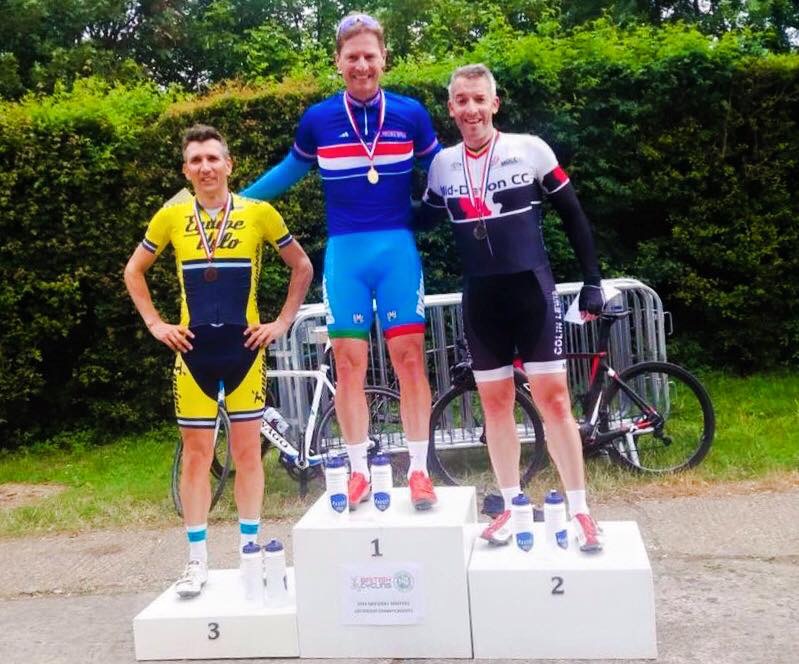 This weekend saw the British Cycling Masters Criterium Champs held in Milton Keynes – Jason Kettle and I ride in Cat D for riders aged 45-50. The race itself took place at Milton Keynes Bowl and being the National Champs was run over 90 minutes, rather than the usual hour.  The course was just over a kilo long and incorporated a narrow technical section, immediately followed by a 40 second draggy climb to the finish line ( which wasn’t too bad at first, but after 40 minutes and 20 ascents it felt like a small col!).  Previous winner Martin Smith of Dream Racing Team was the favourite, and the race predictably drew a very high quality field with 50 of the country’s top masters racers including a number of handy track riders , among them reigning champion Jay Eastwood from Primera RT in Bournemouth, all hoping to keep it together for bunch gallop.

This event has been my main focus for the season and Conrad delivered me in perfect form.  He has had me on a pretty tough regime for the last two months to build my ‘high end’ to help me cope with the repeated efforts required in a Crit and to ensure I could come off a high speed finish and still produce a sprint.  We knew it was going well a couple of weeks ago when I produced a 19 min 15 sec ride to win the Poole Wheelers Ten , breaking my PB by 20 seconds.  After that it was one final very intense week and then a week’s rest.

Once the race was underway I tried to keep a low profile for the first half hour, conscious of the longer than normal  distance, closing a few gaps here and there but trying not to do too much.  Jason was looking very strong covering moves and getting away for a few laps freedom on several occasions.  My plan was to try to get in a small move in the second half to give me better odds for victory.  I was climbing the drag to the finish line well and appeared to be one of the stronger riders. Jason kept trying and was looking really good, but with so many fresh legs he was brought back each time.

Into the second half of the race, I got clear a handful of times of times and spent a few laps off the front. However with the title at stake no quarter was being given and whilst riders were jumping across, they didn’t want to work, preferring to hold-out for a sprint.  I got in one promising move after jumping across to Martin Smith, but it was closed down within a couple of laps.  Into the closing laps the pace built and built as riders fought to be at the front for the inevitable sprint.

I decided to make my final move on the climb as we approached the bell, hoping to catch the sprinters napping – by that stage there were 30 or so left in the main field.  I found my way to the front as we neared the top, ready to launch, just as Martin’s lead out man took up the pace, making any attack pointless.  I slotted onto Martin’s wheel (which I figured was the best place in the race) where I stayed for the final lap, holding second wheel as his lead-out dropped him off with 250 to go.  Fortunately, being an uphill finish it came down to power rather than pure sprinters speed.  At 200yds a couple of riders came past and I hesitated just a moment too long, coming off the wheel and closing in on the pair, just catching Simon Cannings of Equipe Velodrome on the line, but still half a wheel behind Jay Eastwood who retained his title for another year.

Jason was at the fore too, grabbing a  7th place and giving the club two in the top ten!