Ashley Towey has emerged as one of the brightest Mid Devon CC talents in recent seasons. This year to finish off his racing he took on 3 Hill Climbs. Haytor and Widecombe – both promoted by the Mid Devon and Gara Bridge promoted by Cycle Sport South Hams. Here are Ashley’s thoughts on how the races unfolded:

Haytor and Widecombe (combined) were my first hill climbs of the year. This has always been an event that I’ve measured myself on it means a lot to me as an event because I train on these roads a lot. I felt alright on the morning of the race but had an underlying ounce of doubt in my form because of having moved house the day before. Long story, but my stepdad broke his collar bone so it was basically just me and the removals guy moving it all… Suffice to say I was knackered and woke up sore in places I wasn’t usually. Once warmed up and on the start line there was nothing to lose so I just gave it everything. With hill climbs there isn’t much to it other than a good warm up and pacing, oh and pure pain and suffering, but we’ll gloss over that. It’s simple really, go as hard as you can for the distance. I approached Widecombe with the same attitude, gave it everything I had. This time I definitely felt the fatigue and suffered from start to finish! After both hill climbs were done it was time to see the results, I managed to win up Haytor by six seconds from George Fowler (NFTO). He then went on to win up Widecombe by 25 seconds, which meant he won the overall. But for me this was a result I was very happy with, winning up one of my favourite climbs was something everyone should take as a satisfying win. 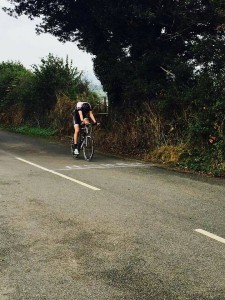 A week later I was excited to give Gara bridge a real go. It is another of the roads that I train on a lot. After signing on, warming up and rolling to the start it was that time again. Go hell for leather all the way! The Gara bridge climb starts with a few steeper switchbacks that make up the main climb, on this part of the climb I road it on the limit. Then as the road levelled off I just tried to ride on the rivet and hold on. It seemed to go on forever, I turned another corner and still there was more flat road in front of me! Then suddenly the line was right there and it was over. After gasping for air it was a waiting game to see how fast the other riders could go. I managed to win, again by a small margin of five seconds from Dexter Hurlock (Kibosh), who to be fair to him had already ridden about 30 miles! I was really happy to take the win, but couldn’t help thinking I wish more riders could have ridden the event. There are plenty of riders in the South West who would have loved to race this, and would have got a lot out of it. There was brilliant organisation from Cycle Sport South Hams, and they were well supported by their club members. I can’t tell if it needs more sponsorship for race winnings to attract the riders or if it’s just the wrong time of year to attract the ‘racers’ out to race, but I’d really like to see more support by riders in the South West to enter and compete in these events, because they’re a challenge but it’s always worth it.