I joined MDCC in early 2016 and, after some encouragement and advice on how to overcome my nerves, I soon completed my first time trial – the sporting Lustleigh / Teign Valley route normally held over the Easter bank holiday.

I didn’t do too badly on my road bike with my cycle jersey ‘flapping about in the wind’ (I find it really claustrophobic having a jersey zipped all the way up when I am exerting myself, so I tend to unzip it even if this means it puffs up with air!) but didn’t really find my time trialling legs until later in the summer when I took part in a host of club 10’s at Clay Pits, Dartington and Budlake. Next came my first 25 in September 2016 which I completed in 1:00:14 – I was really happy with my time and I noticed that I actually managed a higher average speed than in the shorter events.

Over the course of the winter I followed some of the training programs you can print off the British Cycling website. I also invested in some velotoze overshoes, a skin suit (with round low neck to prevent the need for unzipping!), a TT bike and an aero helmet (in that order). My mission, with my lovely new equipment, was to complete a 10 / 25 / 50 and 100 in 2017 so that I had a base line to work from.

So – I picked a 100 course at random, basically one which fell on a day that I didn’t have any prior engagements and wasn’t too far way. In speaking to Conrad the week before the event I learnt that the course I’d picked was a tough one, but I quite like hills and I figured that if I could handle this one, a flat course would be okay too. In terms of preparation – I had fallen ill with glandular fever in April – which pretty much knocked out my March and May from training, but I did manage to get back on the bike in May and do one or two 10’s – I seemed to have benefited from a rest more than losing too much fitness during my time off the bike.

Because the event was about 1 hour 45 minutes drive from our home and I was due off at 6.05 am, my boyfriend and I decided that it was best to find a place nearby to sleep overnight (in the boot of the car!) as opposed to driving up in the morning – which would’ve meant a 3 am wake up. So we left home at 9.30 pm the night before in the hope that a late arrival would invoke an exhaustion that would result in a solid few hours kip. But when we arrived, the stillness of a humid night meant that not only was it boiling hot, but that the noise from a wedding band could be heard from afar. We laughed about how ridiculous our weekend was turning out to be before eventually drifting off at about 1.30 am. At 4.50 am the alarm clock went. We waffed down some bircher museli, a litre of pre-made macchiato (Aldi’s finest), and a weird sausagey eggy tortilla wrap I had made for us the night before. Then we got dressed, in the boot.

I didn’t have time to put my over shoes on because, despite already being there, I managed to run a little late. I got to the start point as no. 2 was setting off (I was 5th) so I soon wheeled myself up to the yellow start line and stared at my Garmin whilst waiting for the ten second count down. 0 miles down, 100 to go.

As I got underway I noticed that the power meter I had borrowed from my boyfriend was producing some ridiculous stats. 470 watts plus. So the advice I had received on power zones went straight out the window and I rode on feel. At this point I appreciated that the course was 5 laps of 20 miles – which made compartmentalising the event into smaller sections really easy. I saw the course as a square (it wasn’t square!) and calculated that 5 laps with 4 sides meant I could count down from 20 each time I completed a ‘side’. The event in total had 4000 ft climbing, so I tried to power up the climbs and relax more on the flat to give me a rest. I felt good, but I had passed all the riders in front of me within the first half a lap which I hoped didn’t mean that I was going too fast and that I would burn out – I guessed I would find out as time went by, so I just kept on peddling and eating and drinking even if I didn’t feel like it so that I didn’t bonk or collapse in the heat. 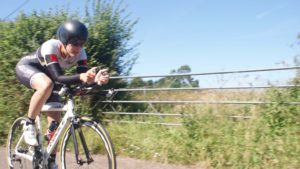 What followed is slightly blurry as I tend not to remember most of the time I am out on my bike (so I am perhaps not the best person to write a report!) but I do remember it going pretty quickly considering it took me over 4 hours, and that during the first four laps there were distinct moments I felt both horrendous, elated, nauseous and in pain from a growing headache I’d got from both the heat and the load of sugar I had been ingesting. It was a bit of an emotional roller coaster, but I was surprised that I felt okay. I had expected it to be much worse. I was therefore interested to note that this general feeling of ‘okayness’ was replaced very quickly in the fifth lap by a psychological battle with myself. During my third lap I was happy to have ‘one slow lap and one faster lap’ remaining and I was confident that my last lap could even be my fastest lap (the first three had been within a minute of each other so at least I was consistent!)

Ten minutes into the last lap the usual doubts started to creep in: ‘why am I doing this’, ‘if I go slower nobody will know’, ‘I can’t be bothered’, ‘yadda yadda yadda’ – this is quite normal for me and it is the main issue I hope to overcome as I get more experienced. So instead of listening to my inner monologue, I told myself that these thoughts were caused by the fact that I should’ve packed just one more energy gel to keep me energised to the finish, and that it was getting on for 10 am so the heat was really picking up. So it was natural to feel like this. I told myself ‘it’s okay if you can’t speed up, just don’t slow down’. So that’s what I did.

My aims for the future are to be experienced enough to minimise silly mistakes like not taking in enough energy gel, to get a power meter so I can accurately track and learn more about my abilities at different distances, and to build on my ability to shut off from the way I feel when cycling hard for a long time – I want to stop. I will be very proud when I can finally say that I have ridden to 100% of my ability the whole way through an event and knowing I couldn’t of gone even a second faster.