On Tuesday 18th July Tim Hingston from the Mid Devon promoted the Inaugural Mid Devon CC World Circuit Racing Champs at the Velopark. The idea of a club champs had been muted for several years but 2017 was the year it finally came to fruition.

First up was a 4th CAT/Go Race event which was won by Stewart Dunn. He reports

The inaugural MDCC crit championships was an event not to be missed, it would set a precedence for championships for years to come. It offer a rare opportunity to race solely against other club members regardless of ability. Unfortunately this wasn’t enough to encourage most members had had the chance to do what they love best, riding their bikes. The sun came out and the wind dropped what more could you ask for. The Cat 4/ go race turned out to be a hotly contested affair. I was determined not to be out of contention for the win before the race started and therefore went off like a Labrador puppy after a stick. I soon saw myself off the front with a 30 second lead. A great move by Simon Aske over to me and I thought we would could stay way. Unfortunately the bunch worked well to bring us back. We rolled around for a few more laps before Paul Burness made a move which wasn’t shut down. I saw the opportunity to get across and took it. Not to make a break but just to mark the attack but by the end of the lap we had a useful gap on the bunch. We both worked hard for several laps then the gap really went out when the will of the pack broke. 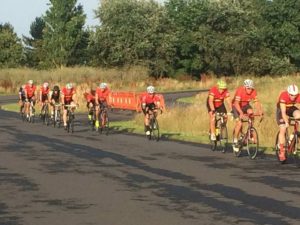 Simon Aske once again bravely made a decisive move over to us and then there were three. We work well together for the remaining laps but the harmony had to end and on the last lap Simon went hard out of the final bend and I got on his wheel, I thought he’d gone too early and was confident I’d easily overhaul him before the line. What I hadn’t considered was the strong tail wind down the finish straight. This meant there was no advantage to being in the wheel so I had to dig really deep to accelerate, the line came up so quickly and just throw my bike at it thinking that I’d done just enough, Simon was sure he’d won it as he had a clear lead all the way to the line but my finishing speed was much greater. The photo couldn’t separate us and even a dodgy Tour de France commissaire would of struggled to pick a winner! But in the end it was just good safe fun and that’s what it was all about. 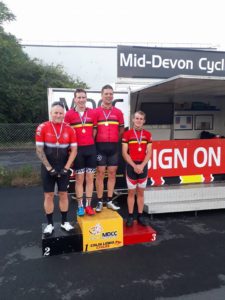 In the E/1/2 Event  Club Chairman, Andy Perkins came out on top.

A small but select field took to the start line on a muggy and slightly breezy evening.  The afternoon’s thunder storms had passed and the track had dried out.  What the field lacked in numbers it made up for in quality with Ash Towey fresh from his 4th place in the weekend’s Stella Farrell Grand Prix, Tim Prowse ready to unleash his big sprint finish, James Scott with several top-three placings already at the Velopark, strong men Mark Coombe, David Johnson and Andy Parker as well as Perky himself, riding on his 46th birthday.

The race was extremely aggressive from the off, with repeated attacks and counter attacks – Jason Cox, James Scott, Karl Allen-Dobson, Parker, Prowse and Johnson all very active.  Ash Towey had several strong digs, but with the title at stake no quarter was being given.  Perky was conspicuous by his absence  – wisely keeping his powder dry.

6 laps in and a threatening move was formed when Johnson and Towey linked-up, steadily developing a 20 second lead over the course of 3 laps.  Sensing the danger Perky and Parker jumped clear and over the course of the next two laps bridged to the leaders.  The four then combined to try to open the gap, however a well organised drill in the peloton saw them hold the lead at 20 seconds for the next 6 laps.  Eventually however, the elastic broke and a concerted effort from the leaders saw the lead start to go out.

Into the last third of the scheduled 45 minutes plus 3 lap distance, it was clear the leaders were not going to be caught and the tactics started.  Repeated efforts by each of the four leaders saw them take the lead only to be pulled back by the combined efforts of the other three.  With 5 laps left, Parker and Johnson drew clear as Perky and Toweyplayed ‘cat and mouse’ losing 200 yds to them.  However, the four were back together as the 3 laps to go announcement was made and from there it seemed likely to end in a 4-up sprint.

Into the finish, Parker led out around the penultimate corner with Perkins dipping beneath Johnson to take his wheel and then getting the jump on the pair 100yds before the final bend where he opened up his spring to win by 3 lengths.  Johnson taking second and Towey third.

The bunch came in a minute later with Tim Prowse getting the verdict for fifth place from James Scott.

“That’s a nice way to celebrate my birthday” quipped Perky after the finish, “It was a very tactical race.  The early part was just a smashfest with riders attacking and other riders then going over the top.  It was clear that pace couldn’t be maintained and nothing was likely to stick whilst there were fresh legs in the bunch.”

“When Ash and David got clear it looked threatening with two of the strongest riders combining.  I jumped out of a corner in to go clear, rather than drag the bunch up, I was pleased to see Andy Parker accompany me as he’s probably the best rider to be in a 2-up with.  It was hard getting across and I was way into the red, but went straight to the front so that Ash and David didn’t ease off.  From there it was about keeping the gap and once recovered, to build on it.”

“The last few laps were really cagey.  I was worried about Ash, he is going really well, has a good jump and had been skipping turns, so I knew he was planning an attack.  We spent so much time watching each other that we let the other two go and could have lost our chance there.  I was feeling good and have been working on my sprint lately, so figured letting it go to the line was a safe bet.  I produced seasons best wattage of 1420 watts in the finish – so was pretty pleased with that.  Hats off to the other riders, there were some very strong guys out there and it was a good race – big thanks to Tim Hingston and his crew for organising  – it’s great to have our own club championship and hopefully this will now become a regular feature.”