Sunday 26th February 2017 saw the Mid Devon CC promote the annual SW Road Race Season opener, the Primavera Road Races. This year saw two races run on a revised course from Hatherleigh out to the Halwill Junction circuit and back to Hatherleigh. The Elite race covered 4 laps of the circuit and the Support race 3. Conditions were damp with a nasty gusting SW wind that picked up as the race went on. The picture below shows Mid Devon legend Andy Hitchens coming into the finish looking like he’d finished a Belgian classic 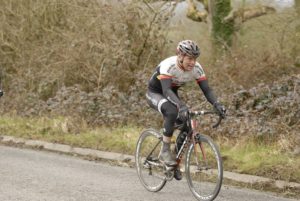 The Elite race saw a group of 5 riders attack early. The opening Prime was taken by Michael Mottram of Morvelo Basso. Mid Devon CC’s rising star Matt Langworthy was alert to the danger and quickly bridged the gap to make 6 riders in the lead group. Matthew Downie from Primera took Primes 2 and 4 and Langworthy the 3rd as the group consistently maintained an advantage of between 30 – 50 secs over the bunch. Matt Langworthy reports on the race as follows:

“A cold, wet and windy Hatherleigh greeted  us all on Sunday morning which I was quite happy with as people don’t like to chase moves when the weather is grim. And the last thing I wanted to happen was to come to the final drag to the line in a bunch where half the field haven’t seen the front all race. The race started pretty relaxed and rolled along with a few attacks which didn’t make much progress as we headed onto the rolling Halwill circuit. Joe Saunders helped me move up and stay sheltered near the front for a fair amount of the first lap – I owe him a lead out for sure. I missed the break which seems to be becoming routine now but I know experience will help. Five guys headed up the road and dangled in front of the main bunch for a majority of the first and second lap with a few people trying to bridge over. The wind was beginning to pick up now and I knew that the break could work as the group wouldn’t want to chase if they didn’t catch it soon. I knew the road from Halwill up to Chilla Cross had a tailwind for sections so if I was going to bridge that would be where it was going to have to be done. I drifted off the front coming into Halwill Junction and attacked up the climb. No one came with me which wasn’t ideal but I started the bridge being helped along by the tailwind and the target of the bunch about 30 seconds up the road. It took about 7km to get across by which time they were just turning into the cross-headwind so lucky I managed to get across before that as otherwise I’d be spat! 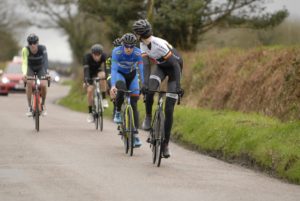 The break was working alright however I could see the bunch wasn’t far behind after a lap at around 20 seconds. We pushed on and a couple of the guys dropped off back to the bunch. As we commenced the fourth lap I got a good view back down the road and we now had over a minute – the bunch must have sat up. I knew that unless I punctured or crashed I was going to finish in this break so I started to think about how to get rid of my two breakaway companions. At this point I wouldn’t have the legs to last solo to the end as it was too windy and there was a definite chance of a pursuing group between us and the bunch. I knew I had that filthy drag at the end which might help me if I went long. We took the right off the circuit onto the final run into the finish. I didn’t want to go too early as the other two would easily pull me back plus we were all spinning out 53 x 11 with the downhill and tailwind so it would be hard to get a gap. As we approached Hatherleigh there was a little rise before the descent to the roundabout. I sat at the back of the group and jumped hard for around 20 seconds over the top. I got a gap immediately and tried not to look back but obviously I did. The two were chasing but not closing so I hit the descent hard to the roundabout to make the final left before the final drag. I nearly overcooked it swinging wide and then ten seconds later I heard the chasing Primera Sports rider overcook it hitting the deck (hope he’s ok!). I pushed on right to the end and crossed the line a minute clear.

This is definitely a break through ride for me being my first National B road race win so hopefully this sets the scene for the rest of the season! Severn Bridge RR next weekend.” 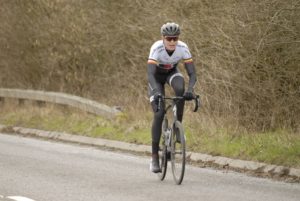 Well done to Matt who arrived  into the finish on his own with Michael Mottram from Morvelo Basso some 16 secs down. The podium was rounded off with Jonathan Fowles from Team Chronomaster who came in 1 min 31 secs behind and led in a group that had attacked the Peleton into the finish. Notable mention for Ian Cullen as well from the promoting club who came in 15th.

Mid Devon CC also won the support race with up and coming 1st year Junior Harrison Wood taking the win in his first Road Race.  Harrison had attacked the field at the mid way point and held a 50 second advantage at one point taking the 2nd prime in the process 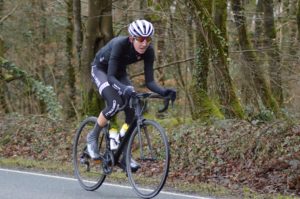 Wisely Harrison decided that he wouldn’t be able to hold of the bunch on his own for the rest of the race and rejoined the main field saving his matches for later on. As the bunch came into the line Evan Rouse had attacked and got a 10 second gap, as the long drag into the finish unwound Rouse was pulled back with Harrison taking the sprint in a total time of 1hr 52 min and 12 secs from Mid Devon’s 2nd year Junior Steven Jones in 2nd. Oliver Cooper from Uni Bath CC came in 3rd. Mid Devon veteran Gareth Bushnell was 4th with a special mention for Louie Priddle coming in 8th in his first Junior Road race too.

Harrison gave us the low down after the race:

Today was my first road race as a junior and I was absolutely buzzing for it. I had worked in Colin Lewis the day before so Simon had given me plenty of advice that came in good use. Warm up done and rider briefing completed and I won the sprint to get to the toilet before the start which was pleasing. The race started off fairly steady with some pace changes but nothing too major I found. The first prime saw the first real bit of action of the race with Steve Jones and Louie Priddle getting stuck right into it. After around 20 ish miles I decided to give it a go on a slight climb and got a gap of around 20 seconds. I drilled it hard and established it to around 45 to 50 seconds along the top section in the cross wind. At Brandis Corner I hit the headwind section and had to push hard but this was where my gap began to decrease slightly. I managed to hold onto the second prime and won it before being caught shortly after. I then sat in and replenished myself with a gel and some water. I then stayed sat in and moved myself around accordingly.

After the laps we headed back towards the finish which saw some very sketchy riding but I remained safe mainly thanks to Gareth Bushnell. Going into the final roundabout I moved up into around 6th wheel as I knew it was going to be quick out of here. Evan Rouse was around 10 seconds up on us at this point and I thought he had it in the bag. People began to wind it up and then I knew I had to go with around 300m to go in order to catch Evan . I did that and managed to take 1st with Steve closely following me in 2nd. Gareth came 4th and Louie came 8th so a very strong team performance. Overall it was a great race and very good fun but obviously very hard as well. I’d like to thank Conrad from Velopower Coaching for getting me to this condition with coaching and plenty of other people such as Andy Parker, Ian Cullen, Matt Langworthy and Andy Perkins for the advice they have given me over the winter” 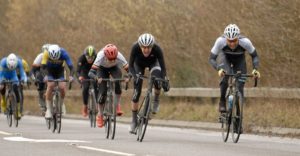 “Extra proud to be an MDCC club member today- fantastic team effort to put on a really well organised event and then to produce two very worthy winners as well. Brilliant effort all – special mention to our crack organising team led by Ken Robertson, ably assisted by Mike Gratton. Thanks to the over 50 volunteers from the Club and beyond who make racing possible and British Cycling’s Andrew Parker and the Accredited Marshall’s for their help”