I’d been offered the chance to be a guest rider for HMT cycling at this race. This race is the biggest junior race in Spain and one of the biggest in Europe. Previous winners have included Mikel Landa now of Team Sky. I’d trained hard up to this point and had a good result the weekend before at the Monmouthshire national so I was looking forwards to racing at a higher level.

Stage 1: After the team presentation as seen on the Tour de France we headed out to the start of the race. The neutralised section was sketchy with riders puncturing and crashing everywhere. They allowed everyone back on and the race began pretty fast. I managed to go straight on the offensive and launched the first attack of the race. I was solo off the front drilling it and opening up a good gap on the bunch. Over the first categorised climb I’d been joined by a Carlos Sastre (former Tour  winner) development rider and we pushed on. The bunch was however chasing hard with attacks going everywhere. After around 30kms off the front we were swallowed up. The next 40 kms were fairly uneventful with me hitting the front a few times and stringing it out. But then we hit the final climb. An 8km climb at 7 percent. GRIM. I rode at tt pace up the climb and was catching lots of riders. Finishing 52nd out of the 200 starters was an okay result for me but I wanted better.

Stage 2: Was a more relaxed neutral section as riders learnt there place within the race. If you were dropped the day before you’d sit at the back basically. A fast start saw no break slip up the road so going into a technical narrow road i hit the front hard for pretty much my own safety. Several crashes happened and the group split into bits. Going over the 2nd category climb I began to get distanced but managed to hold on over the top and descended well to get back to the front of the race. Here my team mate Tim Torrie attacked and going over the final climb I counter attacked a move and was clear in a chasing group. I didn’t help chase and we caught Tim and his group. The group didn’t work well together and a bunch of around 30 riders made the catch with 5 kms to go. I sat in and got 24th on stage 2. Moving me up the GC. 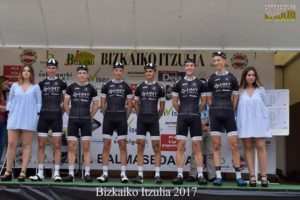 Stage 3: Today was a hard stage. A rolling opening 70kms similar to the Teign Valley finished off with 2x Haytor climbs with the last one having Widecombe chucked in at the top. A Belgian team took up the pace early and had 3 riders up the road. I got across and was joined by around 15 others. A group of around 19 was never going to work well together but we built up a 3 minute lead over the bunch. On the first climb the break was split to bits and I was distanced just near the top but by this point joined by the top 5 on general classification. We descended a technical descent at speed and began the next climb. I cramped badly here but managed to still get a top 20 on the stage and move up the GC once again.

Stage 4a: Once again I found myself in the breakaway but this time with the top 5 on GC minus the yellow jersey. The first hour was spent at a rapid 46km/h average and my legs were tying up. Eventually a group of around 30 came across and I finished in this group after a short but fast stage. I was now top 30 on GC.

Stage 4b: The final stage was a time trial. 14kms long including a hard climb and a technical descent. I started off steady as I knew I wouldn’t hit my normal 10 mile tt power after such hard racing. This worked and I pushed hard on the climb. I clocked a time of 20.13 which saw me take 14th on the stage which I was very happy with. Later that night I found out I had moved up to 21st on GC and 7th on the first year junior classification as well as a top 10 on the KOM standings. A very successful race for me which I really enjoyed and was a great experience! The support MDCC have offered this season has helped me to get this guest ride so I was grateful. I’d also like to thank Conrad for coaching me to this level.